How to Record and Edit Your Own Music
– here's how it's done.

Would you like to record and edit your own music? Keep reading to find out how.

Record and edit your own songs

You can record your own music on the PC, for example, vocals or instruments such as guitar or piano. Or play software instruments like synthesizers, drum machines, or samples with acoustic instrument sounds that sound just like the original instruments. In actual fact, you can play all kinds of genres on instruments from a concert grand piano and African drums to contrabass! You'll be amazed how lifelike these "natural" instruments can sound. Or simply compose your music from samples using the mouse.

Music Maker Free includes hundreds of samples with all kinds of sounds that can be combined using drag & to create new songs, software instruments to play on your MIDI keyboard or directly on the computer keyboard, high-end effects, as well as mixing and mastering tools – and the basic version is completely free. Music Maker enables those who want to make their own music overcome all technical and musical hurdles. Just go with your instincts and make great music. Select matching loop objects and use them to create a backing track for your vocal recordings., for example. Play the included software instruments using your computer keyboard or use the mouse to quickly build beats in the MIDI editor.

All you need to record vocals and accompanying instruments is a normal sound card like the ones installed in every computer. After recording, you can then add the final touches to the whole thing with mastering effects such as equalizer or compressor, and mix your tracks with the built-in high-end mixer to produce a perfect song.

In this guide, learn how to record your own song on a PC, how to edit your music and how to enhance your music-making skills. Here are the basic steps:

Then, you can start to record your own music CD.

Record and edit your own music with Music Maker Free 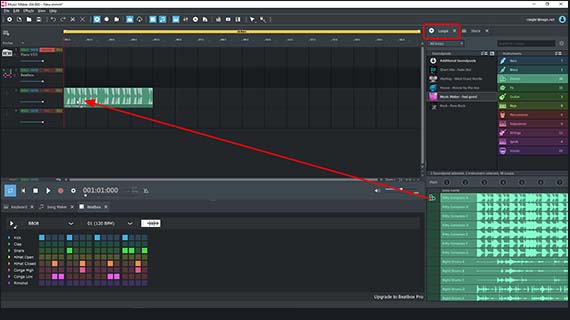 Create your own songs using loops

The free version of Music Maker comes packed with hundreds of samples. Additional Soundpools from a variety of genres can be purchased at any time. You can use these Soundpool loops to produce your own songs or simply a basic framework that you can enhance with your own recordings. 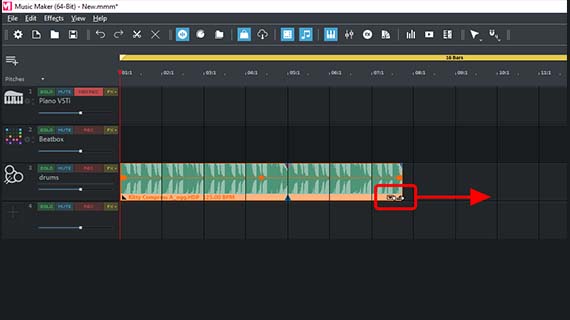 It works like a musical puzzle: You drag matching loops onto the different tracks to create your own music. You should keep a few things in mind, though:

Select a drum loop on the right and drag & drop it to the arranger on the left. In general, a drum loop can be positioned anywhere. Normally, it's easiest to just place the drum loop on track 2 below track 1, the track marked "Piano default".

Each loop is designed in a way that it can be played it over and over again without any gaps or crackling. If you move the mouse to the back edge, the mouse pointer will turn into a double arrow. You can now click and hold the double arrow to drag out the section. It will then continue to play as a "loop". You can also use the same method to trim the loop and make the beginning shorter. 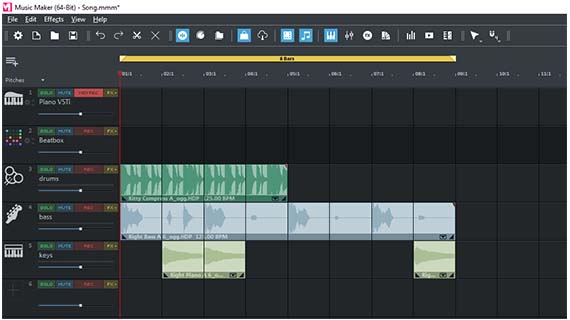 Above track 1, you can see the playback range. The default length is 16 bars long. This range will be played back as a loop. The 16 bars aren't enough to make a complete song, but it's long enough to work with to create the first section. Now, you can shorten or lengthen the playback range from that point to the desired length.

Drums & bass provide the musical backbone for many songs. Every tonally-based loop can be set to seven different pitches. You can change the pitch by clicking one of the seven pitch buttons above the loop library. This is not possible with drum loops, because drum sounds don't have a specific pitch.

Now that you the basics of making your own music on the PC under your belt, you can add as many loops as you like from other instrument categories to other tracks.

Tip: If you only want to create a background arrangement for your recordings, don't use too many different instruments in order to keep the sound from becoming too crowded. Often, drums and bass (and in some cases even a third instrument) are enough. 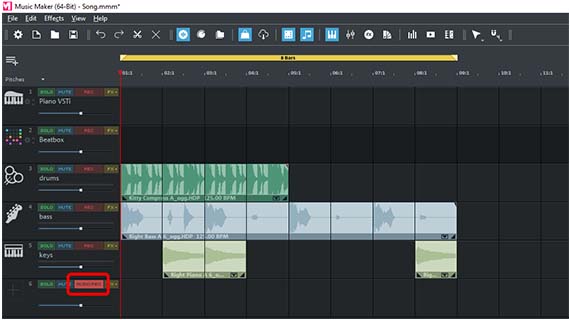 To record your own music with live vocals, an instrument or a complete band, do the following:

Now, the recording will start and you can begin your performance. During the recording, a sound block will be created that will become increasingly longer as the recording continues. 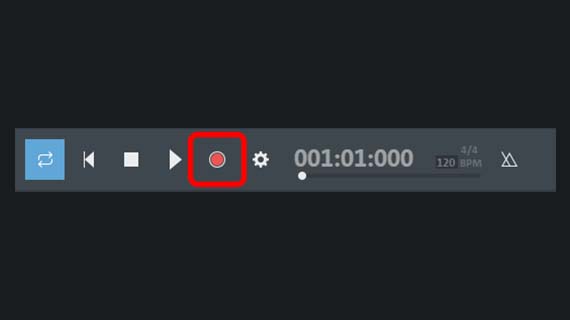 To retry the recording in the case that something went wrong, simply click the red record button again. The recording will start again and the previous, flawed take will be overwritten.

This can also be done to record several takes one after the other. For example, first record your accompaniment instrument like a guitar or piano, then switch another track into "AUDIO REC" recording mode and record your vocals in the second run. To hear the backing instruments while singing, use headphones. 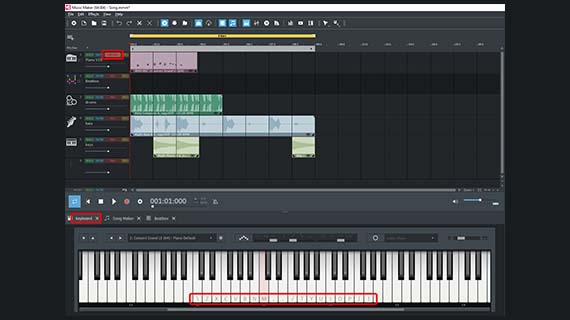 Similar to Soundpool loops, the software instruments are based on short musical recordings ("samples"), but they are employed differently. They can be played like a normal keyboard instrument using the computer keyboard or, preferably, with a MIDI keyboard. Alternatively, you can use the MIDI Editor to program melodies note by note. This is particularly useful for drum beats, where every beat should sit in a specific place.

At the bottom of the interface, you'll see a large keyboard with a piano keyboard. This controls the software instruments. The default instrument sound is a concert grand piano.

Letters and symbols will now appear on some of the keys. These keys indicate the associated notes on the computer keyboard. You can press several keys simultaneously to create a chord.

Through trial and error as well as a little practice, you'll learn to play instruments with dynamically and accurately on the computer keyboard.

To record your playing, you need an "armed" MIDI track, on which you wish to record. Track 1 is set up for a piano recording by default.

Now, a MIDI recording will start.

This recording process works the same way as recording audio, as described above.

Along with the piano sound of "Concert Grand", two other additional instruments are available to play in Music Maker Free: "Revolta" and "Vita LE". The Revolta is a classic synthesizer with many setting options for electronic basses and sounds, whereas Vita LE is a universal sampler and provides sounds for an acoustic drum set in Music Maker Free.

To play the Revolta, the easiest way is to click on the instrument icon on the left in an empty track and select the Revolta. A large, independent Revolta user interface with a number of creative possibilities to modify the sound will appear.

Instead of soft atmospheric sounds, you might now hear a snarling synth bass. Any number of experimental sounds are possible using Revolta. 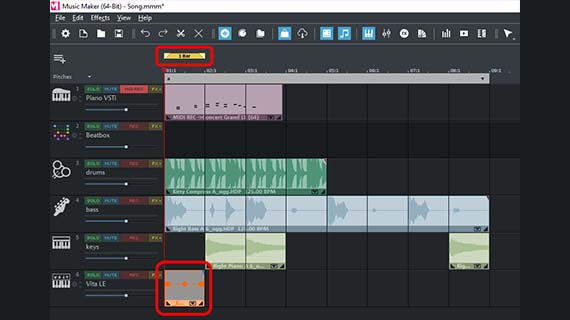 As mentioned before, it's best to program drum beats within the MIDI editor. In most cases, this is easier and more accurate than recording sounds live. To test it out, use the acoustic drum set in "Vita LE".

Here, you can choose from multiple types. One bar length usually is enough to get started. 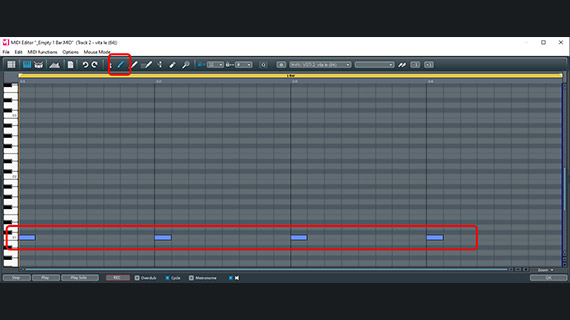 The MIDI Editor is a custom user interface for all software instruments. This is where you program your beats, melodies and chords.

On the Vita, you'll find the kick drum on the left side of the piano keyboard in the "C1". The snare is two rows above that.

The bar will loop, so you can listen to what you have drawn in an endless loop. Press the spacebar again to stop playback.

To get an idea of the sounds that the current synthesizer has to offer, simply drag one of the notes up and down. For every row in the table, the corresponding sample will be played. For example, the snare is two rows above the kick drum. 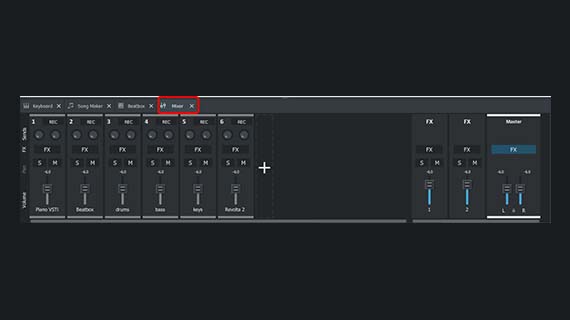 Mix several tracks and apply effects to your music

At the latest by the end of production, it is essential to employ the mixer in order to balance the volume levels of the individual tracks and prevent a muddy sound.

There are volume controls for each channel and a stereo panorama knob to shift the respective track to the left or right.

If you want to accentuate a track in the mix a bit more, it is most effective to do this indirectly by lowering all other faders except the channel that is too quiet. The opposite approach could result in clipping in the mix.

Another way to accentuate a particular instrument in the mix is by using a compressor. 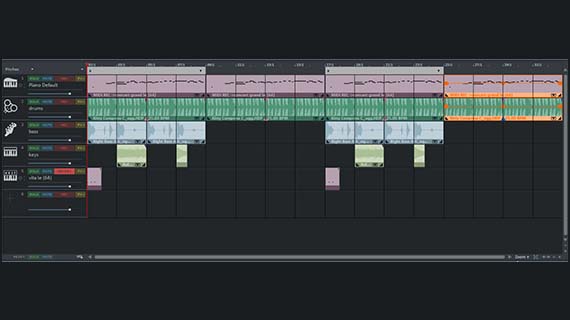 Now, you can expand upon the first bars of your arrangement step by step to create a complete song. In addition to looping, duplicates are particularly helpful here. Every duplicate contains the original sound, but can be varied in any way, unlike looped passages.

The duplicate is completely independent of the original, i.e. you can edit it without affecting the original, for example shorten it to create a break, or distort it with effects.

A second important technique for expanding on your first musical "riffs" is grouping. You can combine as many objects as you like into a group. This group can then also be duplicated and modified with a mouse click, just like a normal object. This allows you to quickly create more complex song structures like verses or choruses.

This enables you to quickly edit the first bars of your own music into the desired length. As you continue, you can add other elements to your music, for example vocal recordings, melodies using the software instruments or other Soundpool loops. 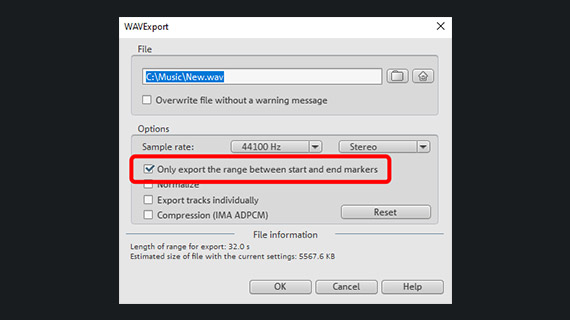 Once you've finished producing your music, you can export it directly as a WAV file or in the compressed format OGG.

During export, all tracks in the arranger are mixed down together with all effects and mixer settings into one "proper" audio file. The final result will sound exactly the same as when played back in Music Maker. 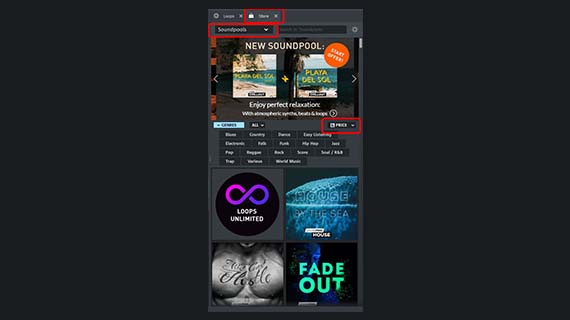 Add-ons for the program

Now, you've learned about the essential functions for recording and editing your own songs. But Music Maker has much more to offer. The basic version of Music Maker Free can be expanded with additional content from the Store, which can be accessed from directly within the program.

As well as further Soundpools and software instruments, you'll also find a number of different professional effects and additional program functions that you can purchase and immediately start using in Music Maker. This will help you to develop musically over time.

Tip: Sort the products by price to display the free offers at the very top. All you have to do is register as a MAGIX customer to get free products.