Producing DJ Music on Your PC
– Here's how!

How can you make your own DJ remix? Keep reading to find out how.

Producing Your Own DJ Music

How can you get your guests to start dancing without anyone taking on the task of the DJ? It's simple: You produce an audio file with your favorite songs beforehand, perfectly mixed together with an even transitions in song tempo, seamless fades and made up of your favorite genres – it's the perfect solution for a party where everyone wants to party and no one wants to DJ.

Or maybe you want to get creative and combine your own beats with samples out of your collection of music to make your own remix? Whatever your idea of DJ music is, with Music Maker you can make it a reality – for free and without any previous experience.

Music Maker enables those who want to make their own music overcome all technical and musical hurdles. Just trust your instincts and make great music. Drag the songs you want to use from the File manager onto the tracks and blend them into a homogeneous remix. Synchronize their playback speed by time stretching and add crossfades between songs. Produce your own beats, slice up songs into samples and remix them using the included loops. You can then add the final touches to the whole thing with mastering effects such as equalizer or compressor, and mix your tracks with the built-in mixer to produce a perfect DJ mix.

Here are the basic steps:

Then, you can start to make a DJ remix. 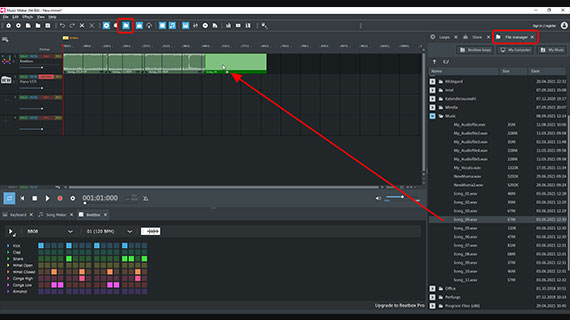 A "classic" DJ performs his playlist live during a party using two turntables or CD players, artfully and subtly mixing the songs together. It is also possible to prepare this list in advance and then let it play back automatically at a party. To do this, first load all the songs you want to mix into a project in Music Maker. On the right-hand side you'll find the Media Pool. When you first start the program, it is in the "Loops" setting. To start to make your own DJ mix, switch to the File manager view in the Media Pool.

You can move any song around freely. It is best to start by arranging the songs in one shared track one after the other. 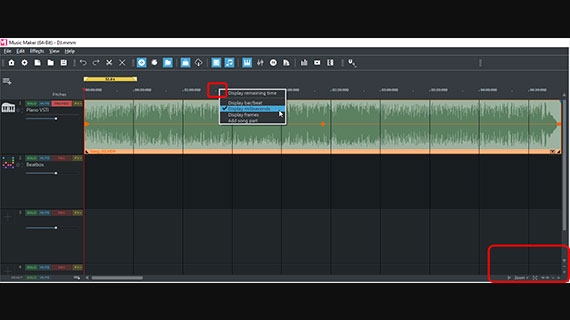 For a long project with lots of songs, it will be important to use the Zoom function, which can be used to change the display as needed.

You can zoom horizontally and vertically. When zooming vertically, the waveform display becomes wider.

By default, the units of measurement in the timeline are bars. This setting is ideal for music production, however units of time are more useful for playlists.

Now, you can tell how long your audio files are in the bar ruler and at which exact time the playback marker is positioned. 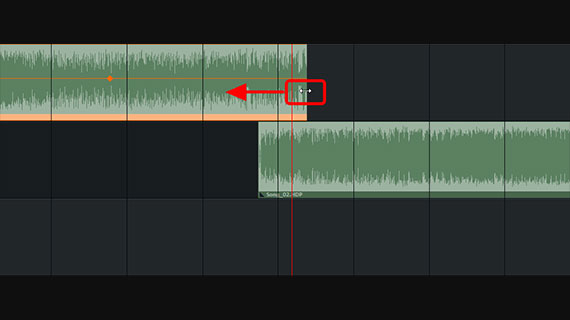 Once the songs are arranged in the desired order, start working on the transitions. Ordinarily, all the songs should blend into each other smoothly. A good DJ ensures that the flow of the music never stops.

Then, try to synchronize the rhythms of the two songs as best you can. Use the waveform display to do this. 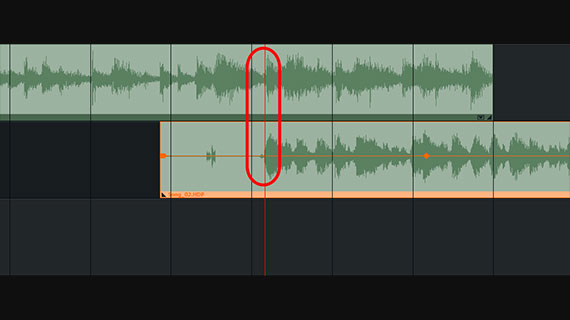 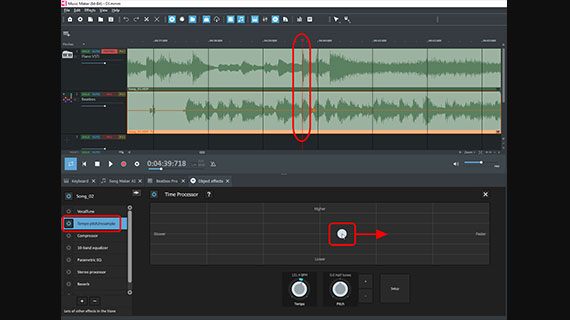 Mixing several songs together works best if the songs have the same tempo (BPM or beats per minute). This is rarely the case even for songs from the same genre. In that case, the song's BPM need to be changed with a timestretching effect. For this, you need the "PLUS FX" add-on module, which you can purchase from the Store.

This will add more uniformity to your mix. 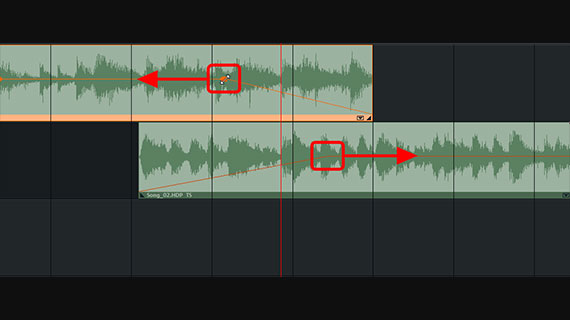 When you're finish, you should have a smooth transition. To do this, adjust a fade:

Now, both songs should blend into each other smoothly during playback without any interruption in the music.

If you want, you can also edit the sound of each song, which can be made more uniform with typical DJ effects. 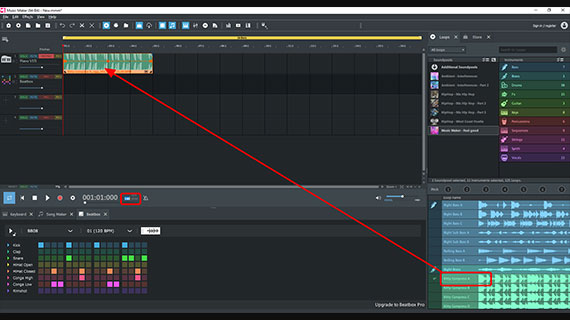 Making Your Own DJ Music

Contemporary DJs do not only play records, but are music artists who perform their own creative musical ideas as well. They employ their own beats and samples. If you want to get into the "high art" of DJ music, you will need one or even better several beats, which you can loop and mix with samples and songs.

After loading the first sample, you can adjust the project tempo. This is displayed in the transport control. The default is 120 BPM.

Of course, the BPM depends on what kind of beat you want to produce. For a calm feel, choose a tempo of about 90 BPM.

This matches the loop to the project tempo. So if you change the project tempo to 90 BPM, for example, the loop is automatically slowed down to that tempo. The tempo decrease gives the "Kitty Compress A" loop a nice, "old-school" touch. 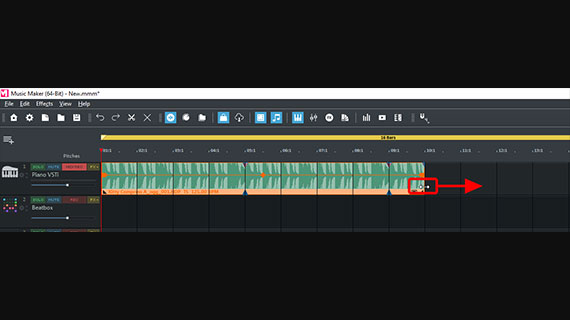 If you use the mouse to drag the right edge of the audio object in the track, you can lengthen the beat as much as you like – or "loop" it. The samples in Music Maker are designed so that there are no awkward pauses or unevenness in the beat when "looping". This means you can quickly create complete tracks with beat from a few drum loops by simply dragging the loops out.

Making beats with included samples is quite simple: Open the instrument folder, preview & choose samples, drag the loops onto tracks and lengthen them to desired length. You can easily combine any of the available sounds as you like it. Additional Soundpools with samples from almost any genre imaginable can be purchased from in-app Store.

If you mix your own beats and samples with existing songs, it is essential to employ the virtual mixer in order to balance the volume levels of the individual tracks and prevent a muddy sound.

There are volume controls for each channel and a stereo panorama knob to shift the respective track to the left or right. 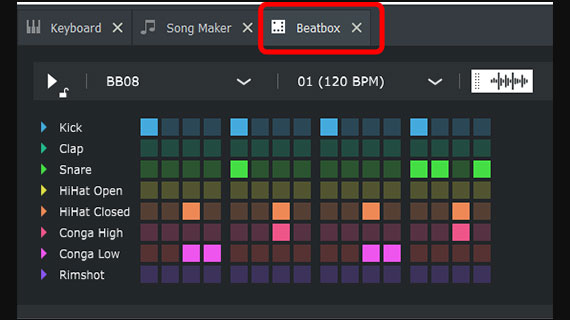 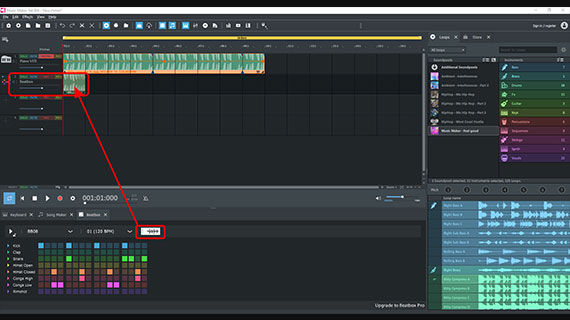 If you don't want to stick to pre-made songs & samples, there are other ways to create your own remix.

Beatbox provides you with a particularly easy-to-use module for your own DJ music production. It lets you create your own drum beats and play them in sync with different loops.

The matrix represents one entire bar and sounds can be assigned to each 16th note within the bar.

This will convert the Beatbox pattern into a standard audio object that can be looped or cut like any other object. 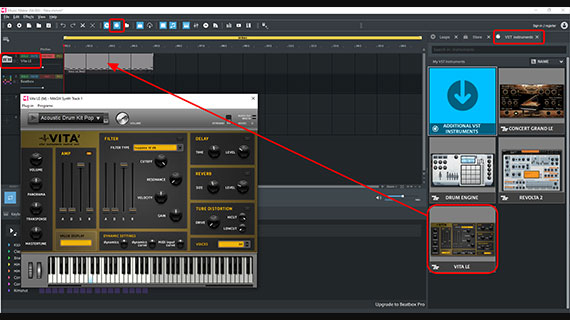 The included VST instruments offer even more creative possibilities to make DJ music. To get started, it's best to use the "Vita" sampler included in Music Maker Free with its free "Acoustic Drum Kit".

If you leave the drum sample on track 1 and drag the Vita to a track below it, the "Acoustic Drum Kit" will be combined with the sound from the Vita. This process is called "layering": Multiple layers are played at the same time and together create a fatter beat. This is how professionals create individual tracks for each element (for example, the kick) and "layer" the sounds on top of each other. At the end, the real challenge is to fine-tune all the layers so that the the final mix doesn't sound muddy. 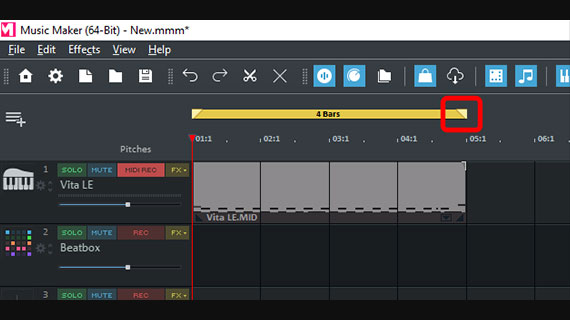 When you load a software instrument, a MIDI object will be created by default so that you can preview the sound and configure the instrument.

This enables you to play back the MIDI object looped. 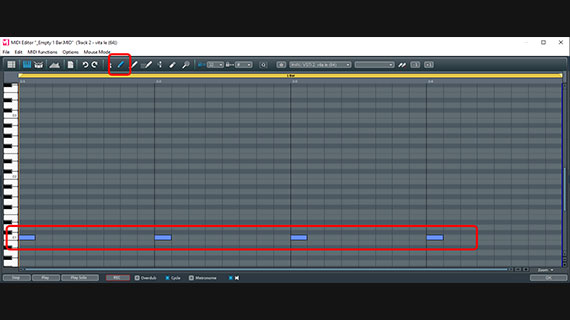 Now, you have a "blank canvas" in front of you, so to speak, that you can freely arrange. Later, when you have finished the one-bar beat, simply loop the object to the desired length of bars or copy it as often as you like to make variations in the copies.

The Vita can be played and recorded (like any other software instrument) with the computer keyboard or using a USB keyboard. The keys on the on-screen piano keyboard below tell you which keys are on your computer keyboard that you need to press to make the associated notes.

However, programming drum beats is easiest note by note. This approach gives you the most control over the result and is recommended for creating drum sounds.

The simplest rhythm is a beat with four beats: Boom, boom, boom, boom. To make this beat, simply click four times next to each other in the table row C1 and in the fields 1:1, 1:2, 1:3 and 1:4. These fields indicate the main beats of the beat: One, two, three, four.

The bar will loop, so you can listen to what you have drawn in an endless loop. Press the spacebar again to stop playback.

To add a snare into the beat as well, simply move every other note up two lines. This also functions during live playback. Now, you will hear a beat with "Boom, tack, boom, tack".

This may sound relatively unspectacular now, but it will become more interesting as soon as you use two beats instead of one on the count of "three". Like this: Kick, snare, kick-kick, snare.

To do this, simply place another note behind the third note in the fifth column of the third beat.

Next, add some driving beats on the "ride" in an offbeat rhythm. The offbeat positions are the unstressed beats in a bar. If you count "one and two and three and four and...", the offbeats are on the "and".

If you've come this far – congratulations! You've programmed your own beat note by note for the first time.

Now that you know the principle, everything else is entirely up to your musical imagination. Naturally, your beat can be altered or extended as desired. For a driving "Boom, tack, boom-boom, tack, boom-boom", for example, simply add an additional note on the kick drum to the fourth part of the beat – and you're done.

Or you move the horizontal position of the second snare a little backward.... 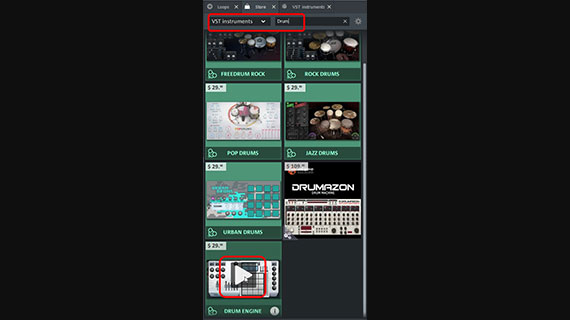 Finally, we will show you a feature that is not included in the free version Music Maker Free, but would considerably enhance your DJ music production. The "Drum Engine" delivers legendary drum machine sounds and can be purchased from the in-app Store.

This will take you to an informational page where the specific item is described in more detail. You may also buy it here. After purchase, a download occurs and then the Drum Engine is available in Music Maker.

Tip: If you are interested in several instruments and Soundpools, consider purchasing a complete edition instead of individual add-ons. There are editions for content from specific genres (e.g. Music Maker Rock or Hip Hop) or general editions like Music Maker Plus. Every edition unlocks a bundle of additional features, Soundpools or instruments, and allows you to better use your multicore processor. Be sure to check the Store regularly to see which special offers are currently available. 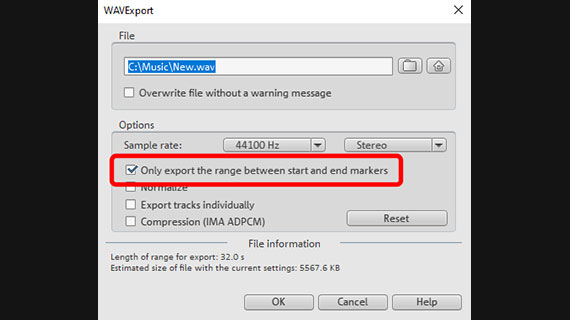 Once you've finished producing your playlist or DJ music, you can export it directly as a WAV file or in the compressed format OGG.

During export, all tracks in the arranger are mixed down together with all effects and mixer settings into one "proper" audio file. The final result will sound exactly the same as when played back in Music Maker.

And when the party gets started, play back your WAV file with all the pre-produced songs and party with your guests. 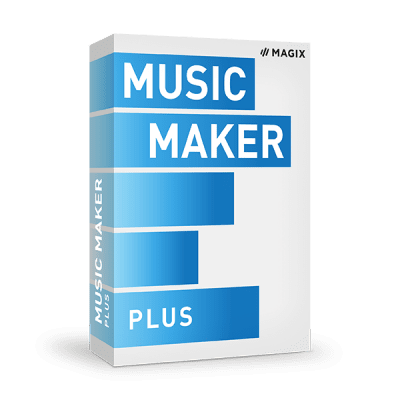 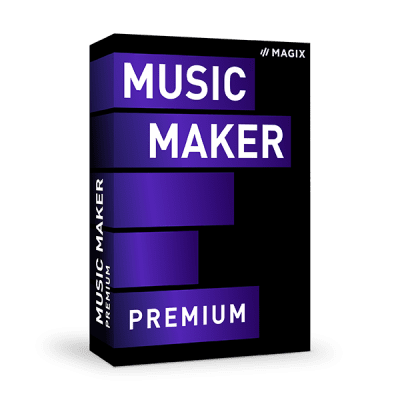