How to create a wedding video

Follow these steps to create a beautiful wedding films:

Creating and editing a wedding video
with the proper software

Almost every videographer will have the chance to film a wedding at some point. Between guests and the happy couple, there is an audience interested in the exciting story which is present: the happenings of the wedding.

However, this means that you can't film any opportunity missed. Check to be sure that there isn't a second camera operator who would be willing to help while filming.

It is good advice to plan a wedding video as a short summary of the couple's celebrations. The most important events should be discussed in advance. And hold back from joining the party until the morning after, because even during the late hours, some funny moments are still guaranteed to happen.

The film shot ("footage") can be reviewed later in peace on your PC and with the right video editing software and edited. Store the footage on a separate disk drive and give it to the newlyweds together with the wedding DVD. Then, the bride and groom can enjoy the entire show once again – maybe even at their silver anniversary.

Naturally, the wedding day is the day of truth for your film. But if the time and possibility is available, you can also film the events beforehand. Accompany bride or groom during their shopping. Film while they choose the venue for their wedding. How they choose their rings, tuxedo and wedding dress. How conversations go, hopes are expressed and problems solved.

Film as much footage as possible so that you'll have plenty to work with when it comes time to start editing on your computer.

In addition to one or more high-quality cameras, you'll need a PC and a powerful video editing program for your wedding video. With this software, you should know that it is not usually enough to make a few cuts and add a little music. Your video editing software should "be able to do more". Shaky footage should be smoothed with powerful image stabilization, poorly lit passages should be optimized, titles should be added in stylish fonts, the audio track and background music should be cut and mixed.

The video and audio editing software Movie Studio Platinum provides everything you need to edit your wedding videos deftly in post-production and then subsequently burn them to a DVD, AVCHD or Blu-ray Disc.

In the following, we provide a step-by-step guide for how to help document a couple's wedding day perfectly in your new job as a videographer.

As with any film production, there are two stages in the production of wedding videos: the shoot and post-production. Let's begin with the shoot. 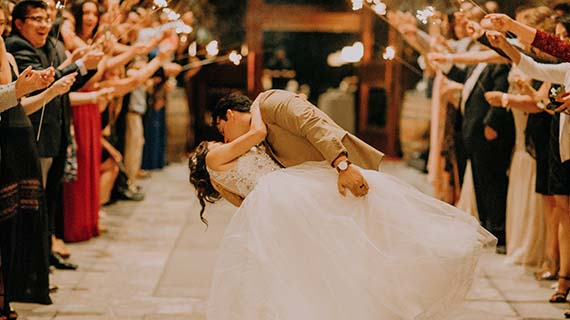 Filming wedding videos: On the day of the shoot & wedding

The acutal wedding video is brought to life afterwards on your computer during "post-production". 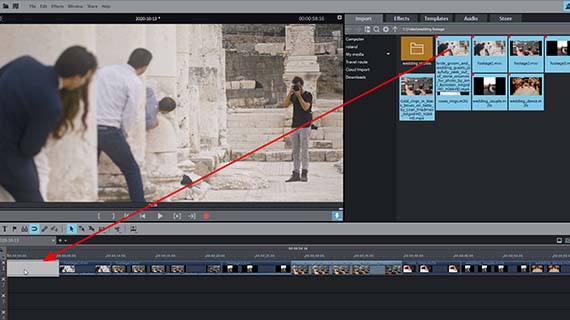 Tip: If you want to load a lot of files, click on the first and then click on the last file holding the Shift key. This will select all files. Then drag and drop the selected files together into the project. They will be arranged one after the other on the first track.

This will help you keep an overview of the footage.

Next, sort all the footage sequentially. You can also use several tracks to do this.

Then, consider which passages shouldn't be used because they are shown elsewhere or too long, for example. Then, you'll need to edit. 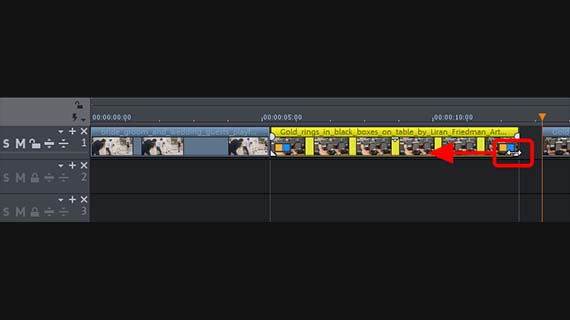 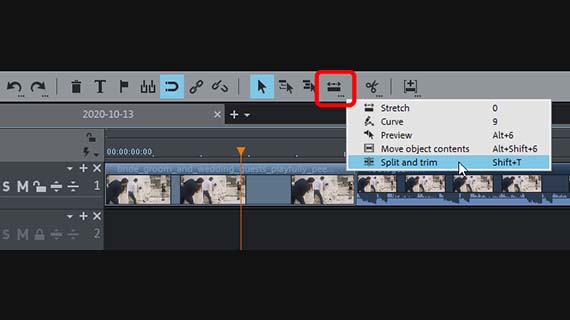 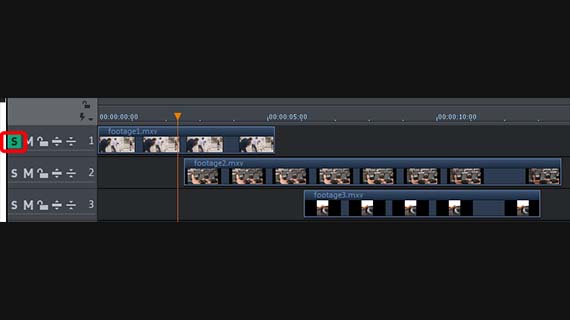 If you have shot several videos from the wedding ceremony, choose one audio track and mute all the others.

This will solo the track so that you can easily preview it without any other material from any other track disturbing you.

Then, you'll have a video with the selected "sound track" and a number of muted videos with synchronized video of the same scene. Now, you can begin mixing the different source videos together. 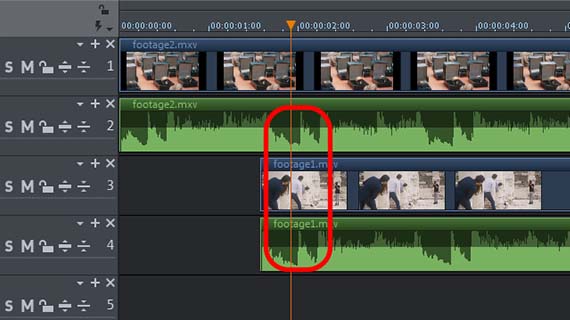 This way, you'll always know where to find your master audio track.

In general, the lower a track will cover any tracks positioned above it.

Videos that show the same scene need be synchronized, so that the picture always matches the sound on the audio track. This can easily be done by simply muting unwanted audio tracks. You'll need to make the video's audio track visible to do this:

The waveform display allows you to visually guess what can be heard on the respective audio track.

Once the videos are synchronized, you can cut the video footage from the videos using the process described above. 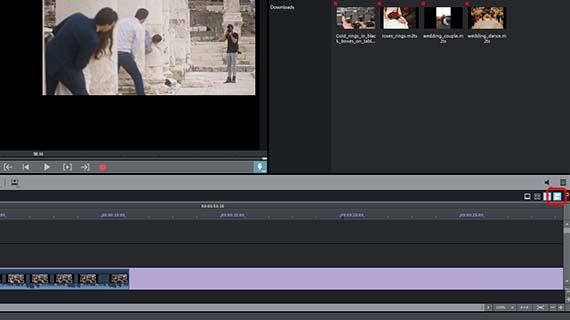 A more easy-to-use alternative to the aforementioned process is multicam mode in Movie Studio Platinum. You can use this specialized mode like a control console to cut two videos together:

Now the two videos will appear in small preview pictures in the left area of the preview monitor. On the right, you'll see the larger context from the master track.

You can either start playback and edit live by clicking with the mouse on one of the two preview pictures, or you can move the playback marker manually to the next cut and place your edits at your own pace.

Click by click, a target track consisting of the respective sections from the two videos will result.

Tip: If you want to cut more than two videos together using a multicam editing, you'll need to get MAGIX Video Pro X. This program works essentially like Movie Studio Platinum, but it provides a advanced features in additional areas.

Next, you'll need to perform some fixes for more detailed edits. 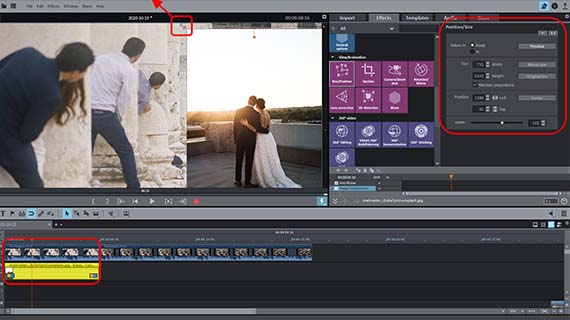 The wedding video can now be enhanced with additional media. Would you like to add a split screen, for example, a video with the groom on the left and one with the bride on the right? It's easiest to use one of the numerous templates included.

The following videos (or photos) will then automatically be merged into a split-screen collage.

What about an overlay, for example, a photo that appears in a specific area of the video?

Because all objects in the lower tracks cover those in upper tracks, only the overlaid object can be seen in full-screen at this point.

This will make a frame appear in the preview monitor.

The top-most video will become visible in the margin areas you reveal. 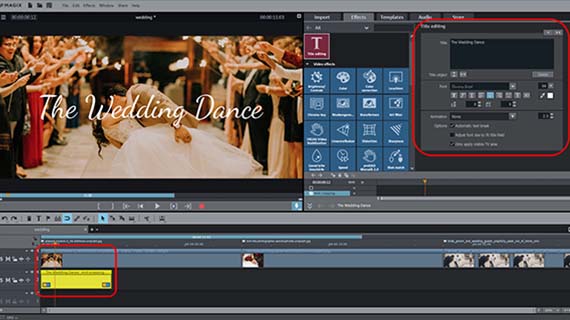 You can best create titles and text by using the title templates provided.

Here, you will find a number of romantically-themed templates, for example "Wedding (Intro)" and "Wedding (Outro). If you load on of these templates, the accompanying media will be placed at the beginning or end of the project. Now, all you have to do is add your own custom text. 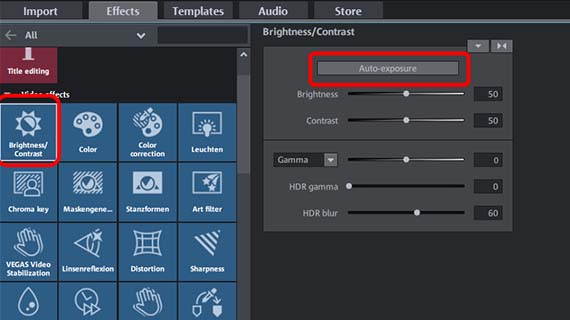 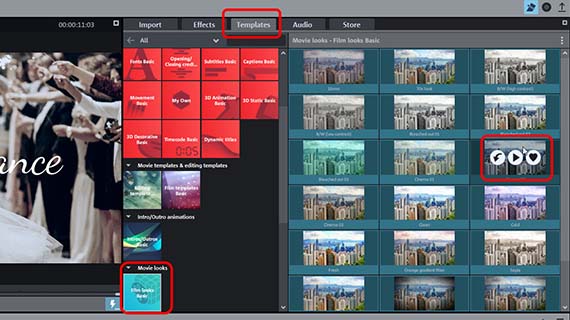 Last, it's time to work on the visuals of your wedding videos and optimize the video quality as necessary.

Do you want all your clips to have the same look? Perhaps you want specific footage to be in black-and-white. Consider which aesthetic effects might be suitable for the video. Try a number of different options. Place all of the scenes you want to have the same look on separate tracks and then open the effects dialog for one video or photo. 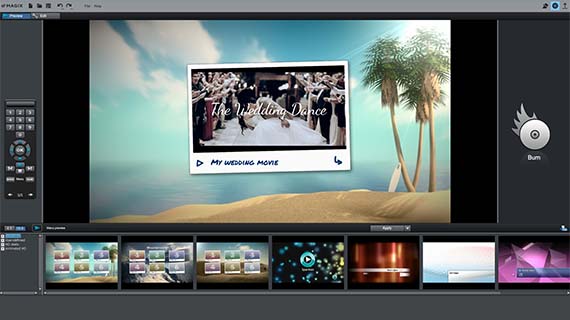 Burning a wedding video
on a disc with a menu

Finally, if everything plays back in Movie Studio Platinum as desired, burn the wedding video on a disc, along with a custom-designed selection menu.

This will switch to the burn interface.

If you haven't set any chapter markers yet, you'll be asked whether you would like to set these manually or automatically. Using chapter markers, the audience can use the remote control to jump between different chapters and scenes of your video 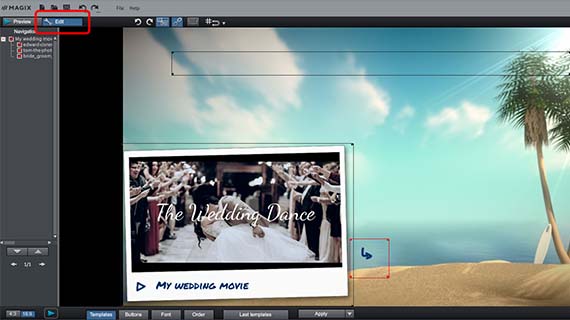 You can also combine individual menu elements with one another, for example, the font from one template with the layout in another template..

Menu text can be changed simply by double-clicking on an entry. If you want to modify the menu even more, switch to the "editing" mode. Here you can make any desired adjustments, e.g., creating new buttons, moving or deleting graphic elements and even importing Photoshop files as menu layouts. 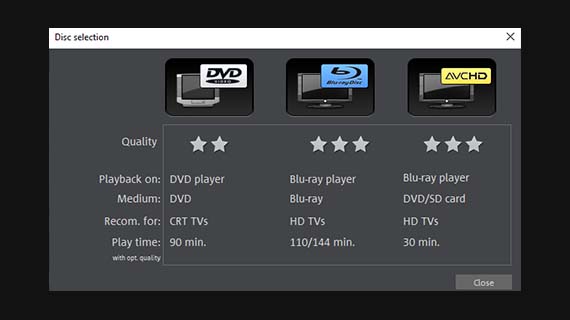 This will open the MAGIX Cover & Label helper tool. You can use it to design and print stylish covers, inlays and disc labels.

Then, you can give the USB stick and disc to the newlyweds and enjoy your hard-earned salary.